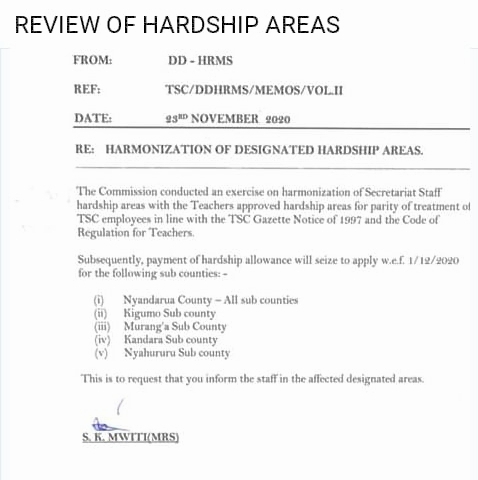 The Teachers Service Commission (TSC) has reviewed the list of subcounties that will be Reffered to as Hardship areas. Teachers who have been working in these areas have been receiving incentives (hardship allowances) to help sustain them in those places by compensating for lack of social amenities, infrastructure and a challenging environment 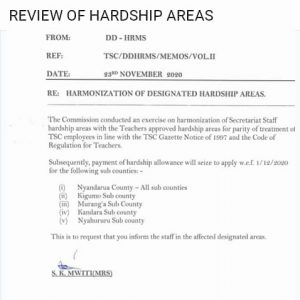 TSC made an official  announcement that will see teachers working in these areas have their Salaries reduced.

This announcement has come after TSC started off the process of mapping out and reviewing hardship regions in the country in September this year. The salary reduction of hardship allowance in areas where it has been scrapped off   is expected to start on 1st December 2020.

TSC officers had been dispatched to various sub counties to assess and collect data for centers to be excluded because of the development achieved in such areas over time and others to be included to enjoy the incentives because of the conditions which are likely to demotivate teachers from working in such areas.

Two months ago World Bank called for scrapping of hardship allowances paid to government employees to save kshs. 3 billion as part of cost cutting measures to return the country on track after increased spending during coronavirus pandemic. Hence the Move by TSC.

“The review of hardship zones is needed as several regions have developed their infrastracture and social amenities over the last two decades and are no longer classified hardship areas,” read the World Bank report on Kenya Public Expenditure Review.

This has come as a shock to many teachers who have been using the hardship allowances to secure loans.