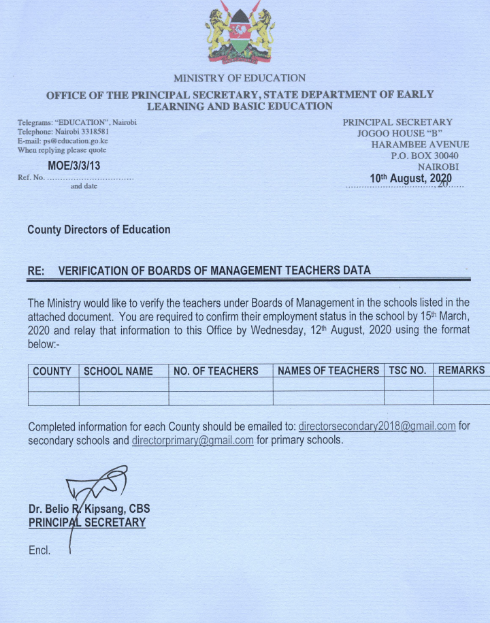 Finally, there seems to be light at the end of the Tunnel for  the B.o.M teachers employed in Kenya Public schools.

This is after the Ministry of education published a circular and sent it to the County Directors of Education asking them to Verify the employment details of B.o.M Teachers.

In a Circular Sent to the County Directors of Education, the Ministry of Education has asked the Directors to Verify the employment of B.o.M Teachers in Public schools by August 12th, 2020. They also gave a format in which the information should be presented.

Click the Link below to see the document sent to the County Directors of education.

This comes after The CAS education Kinuthia Promised teachers that they will get their payments as from March on the Month of August.

The government had earlier on stated that it will cushion BOM teachers and teachers registered under the Teachers Service Commission, with the fate of private teachers unknown.

On Friday, August 7, Treasury CS Ukur Yattani stated that he would consult Magoha on the funds, which Yattani had already given the green light to be released.

“The funds that are supposed to be released to schools will be used to pay BOM teachers and other workers, and I have already given instructions for the release of the money.

“I will confirm with Magoha if the budget has been drawn and submitted to the Treasury,” Yattani stated in an interview with the Daily Nation.

On Thursday, August 6, CS Magoha assured principals and BOM teachers that the funds will be released, with school heads confirming that Ksh 3,725 per student for operations and Ksh 1 per student for tuition was released.