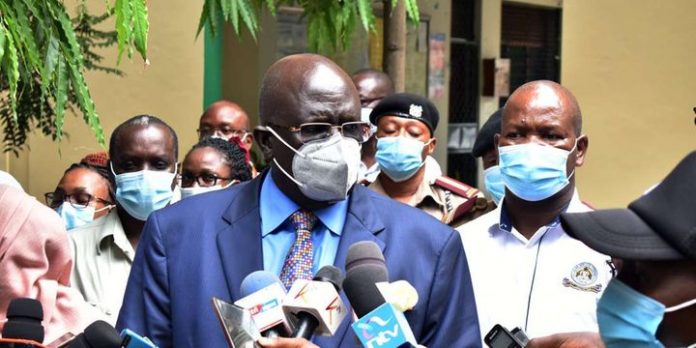 It is now official that there will be three national examinations developed, managed, and marked under firm supervision of the Kenya National Examinations Council (Knec).

It is also emerging that teachers will shoulder the new curriculum burden, as a report by a task force on the Competency-Based Curriculum (CBC) shows teachers will have added roles in scoring children and helping them make career decisions that may make or break their future.

The Saturday Standard can also reveal the finer details of why the Government wants children in secondary schools, especially junior secondary, to be day scholars.

A keen read of the CBC task force report handed to President Uhuru Kenyatta unravels the truth about Knec national examinations and assessments that will be done at school level under teachers’ supervision.

Each learner will be given a tracking number at Grade 3, which will be used to monitor progress as they transition in the subsequent education levels.

It is now clear – from the report – that Knec will only set, administer and supervise national examinations in Grade 6, 9 and 12 during the entire basic education journey of children.

“The national summative assessment will be administered at the end of Grade 6, sampling the works covered in Grade 4, 5 and 6. Knec will develop the tools and guidelines; supervise the administration and score the national assessment,” reads the report.

And for the final examination, report says, “National summative exit examination will be administered by Knec at the end of Grade 12.”

The details of the report mean that one new Knec supervised examination will be introduced in the middle of secondary education (at Grade 9), in addition to the present end of primary tests and secondary exit national examinations.

The task force report recommends that the national examinations be renamed.

“Knec to review the Knec Act (2012) and all regulations to align with the curriculum reforms, including renaming of the institution and renaming of the assessments to be administered under CBA (competency-based assessment),” reads the report.

The rest of school-based and class-based assessments will be administered at the institution level under the supervision of teachers.

Knec will only provide samples of all new assessments, provide assessment tools and related rubrics and monitor the administration and scoring of school-based assessments to ensure credibility.

Knec will also develop the competency-based assessment framework and related regulations and rules.

What however is clear from the report is the new teacher burden in the life of children’s basic education journey.

This means teachers, presently used to offering homework and limited class assessments, will have a lot more work in their hands, in addition to guiding children to nurture a holistic child.

At pre-school and lower primary, the report says the purpose of the assessments will be to establish competencies and readiness for transition from pre-primary and to facilitate seamless transition to primary school Grade 1 without creating inhibitions caused by examinations, tests or interviews.

At primary level, assessments will be administered continuously during the course learning, culminating in a summative assessment at the end of Grade 3.

However, Knec will only develop assessment tools, with teachers administering, scoring and giving feedback to the learners.

Each school will submit the scores for the learners to Knec for analysis and reporting at the national level.

For Grade 4, 5 and 6, school-based assessments will assist in informing mastery of competencies and readiness of learners to transition, and provide feedback to stakeholders such as learners, parents, teachers in subsequent grades and curriculum developers.

“The formative assessments, which shall contribute to the final reporting as learners transit to Junior Secondary schools will entail classroom assessment and school based assessment to be administered by subject teachers during learning in Grade 5 and 6,” reads the report.

This means Grade 6 learners will not only sit the school-based assessments, but will also write a national examination managed by Knec at the end of their education.

And in secondary education, similar school based assessments will be administered across all grades.

These will be used to identify learners’ areas of interest to guide their selection to the various pathways and tracks as they transition to senior secondary schools.

At senior secondary – Grade 10, 11, and 12, teachers will also assess acquisition of knowledge, skills and competencies in the subjects for certification.

Teachers will play a key role as their school scores will facilitate selection and placement at tertiary level, world of work and career development.

The report has also pitched a strong case for day schooling, terming it cheap, and saying it will drastically reduce cost of education for parents and guardians.

The report says under the 2-6-3-3-3 education system, children exiting to secondary schools will be younger and will still require parental support.

It makes reference to the Basic Education Act (2012), which says learners should join school at the age of six years.

This means by the time the children will get to Grade 7, they will be 12 or 13 years of age.

“Transition from primary to secondary schools is hence considered a significant biological, psycho-social and academic milestone for learners,” reads the report.

It says the age group coincides with the phase when young learners undergo rapid physical, mental and emotional growth and development.

It also says at this stage, children also undergo a crucial period of cognitive, psychosocial and emotional transformation, which require parental support.

“Learners at this phase of their lives not only require relevant knowledge and skills but also fostering social cohesion and appropriate values, which is enhanced by parental involvement and engagement,” says the report.

Based on these reasons, the report proposed that junior secondary schools be made all day.

It, therefore, proposes that learners leaving primary schools are placed in nearby secondary schools as day scholars.

The Government seems to have started implementation of this proposal by directing school heads to review students’ admissions to Form One places.

The circular by outgoing Basic Education PS Belio Kipsang said candidates’ choices for day schools must be those within their parents’ or guardians’ homes.

“This is a departure from the past where candidates made choices from schools within sub-counties where they sat examinations,” said Kipsang.

This will be a major difference from present practice where some students in day schools are enrolled in institutions far away from their parents’ or guardians’ residence, posing huge transport challenges.

“Kindly advise all schools presenting candidates for KCPE that the choice of the day schools will be based on the parents/guardians area of residence,” said Kipsang, in a circular dated February 11.

The PS said cases where parents admitted their children to day schools far away from where they live must stop.

The directive means all candidates who had selected day schools away from their parents’ or guardians’ homes will have to revise their choices.

The daunting task of making schools ready for the planned day school move is also evident in the report.

Report also proposes that some schools are merged and existing idle facilities like dormitories converted into classrooms.

The overall infrastructure development has also been proposed by the report, advising that schools that require a boost be identified.

“Identification of special circumstances that may require establishment of new day secondary schools where need should arise such as underutilised primary school facilities can be used to create a secondary school,” reads the report.

It also proposes utilisation of vacant tuition blocks in primary schools that neighbour the secondary institutions.

And making multi-purpose use of the existing tuition facilities, rationalised use of dormitories and other idle facilities has also been proposed.

Overall, the report points at huge infrastructure and staffing challenges that will require huge financial resources during the rollout of the new education system.

Billions of shillings will be required at basic, tertiary and university levels to construct new classrooms, recruit more teaching staff and training of existing staff in an elaborate plan to implement the CBC.

Report proposes that the Government undertakes progressive expansion of capacities of existing secondary schools that have adequate land to accommodate more learners in 2023.

In addition to this, the Government will be required to make provision for primary schools that have adequate infrastructure to establish a junior secondary school.

And schools in close proximity would be merged and the infrastructure in one improved to create a junior secondary school.

“Develop a framework to facilitate sharing and management of infrastructure among primary and secondary schools that will be established in the same compound,” reads the report.

As new Basic Education PS Julius Jwan and KICD Chairperson Sarah Ruto take over the implementation of the system, it is clear that the next four years will be crucial for the national rollout.

Dr Ruto and Jwan, under the supervision of Education Cabinet Secretary George Magoha, will now face the daunting task of making ready basic education institutions to conform with the new transition challenges.

A detailed plan of activities seen by the newstamu reveals that by 2025, enough classrooms should have been constructed to foster smooth transition of learners from primary to secondary schools.

After completion of primary education at Grade 6, the learners will join junior secondary school under Grades 7, 8 and 9, which will be domiciled in the present secondary schools.

An implementation schedule reveals that between now and 2025 will witness a flurry of activities that will touch on staff recruitment and improvement, infrastructure expansion, courses revision and review of admissions criterion to ease transitions.

At basic education level, the ministry must develop a database for the existing public primary and secondary schools, including those in special schools by June this year.

Around the same time, the ministry should have developed infrastructure norms and standards for all basic education institutions and teachers training colleges.

The timetable requires that between now and December, the ministry should have developed and operationalised a framework for infrastructure management and sharing for primary, secondary and TVET institutions.

Overall, the report requires an elaborate plan on staff training and development. The minimum entry grade to teachers training colleges must be raised to C by next month and guidelines published, and new guidelines for internship for newly trained teachers developed and adopted by May this year.

At university level, guidelines on establishment of new universities must be done by 2023 and 2025.

And between now and 2024, report recommends an audit of universities infrastructure to determine capacity to host CBC pathways and tracks.

During the same period, the government must construct requisite infrastructure and equip universities, especially in STEM, and arts and sports pathways and tracks.