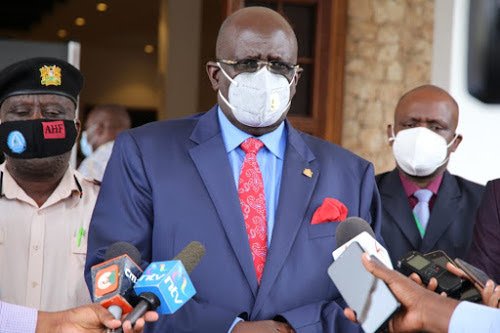 Speaking during a tour inspecting the preparedness of schools in Murang’a on Wednesday, December 30, the CS stated that no country in the world had managed to build extra classrooms due to the Covid-19 pandemic.

“Teachers should become innovative, if the weather is as good as it is now, nothing stops the headteacher from holding some classes beneath the trees while others are inside,” he stated

He urged people to stop criticism against the reopening plans without solutions. Schools are set to resume on January 4, 2020. 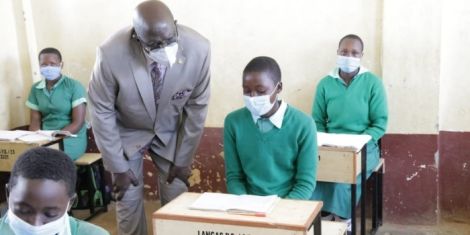 CS Magoha pleaded with parents to ensure their children are well equipped to head back to school by providing them with masks.

He added that the funding from the government amounting to Ksh19 Billion would be wired to the schools before they reopened with Ksh14 Billion allocated to secondary schools and the rest to primary schools.

The Education CS noted that the desk project was progressing well in which the government had identified 5,254 secondary schools and 5,136 primary schools as beneficiaries.

CS Magoha warned groups who were out to sabotage the upcoming exams as well as assuring that everything would be held according to the set timelines.

Earlier on headteachers expressed their opposition to the full reopening of schools citing inadequate preparation in a majority of schools.

The Kenya Primary Schools Heads Association (KEPSHA) argued that the large populations in several public primary schools would make it near impossible for them to implement and adhere to health protocols in the fight against Covid-19.

They further stated that they were underfunded to carry out their operations.

The school heads asked that they be allowed to hold the school sessions in shifts.

“We are proposing the government allows school heads to call learners back in shifts as that is the only way we can observe social distancing in schools. Currently, schools don’t have enough classrooms,” Gathemia stated.