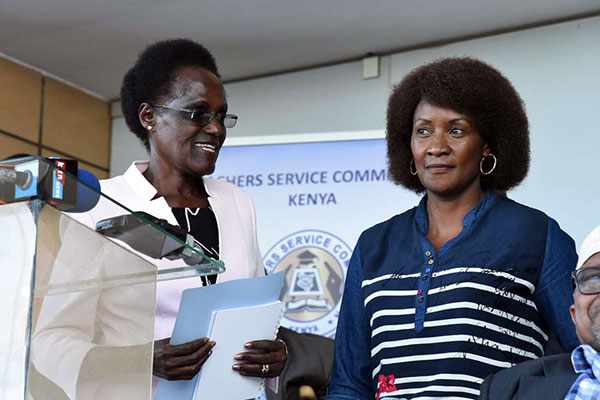 Teachers Service Commission has found itself between a rock and a hard surface, over delayed payment of intern teachers.

The commission recruited 10,000 interns last year but, three months of service, its yet to pay some of them their monthly stipend as per the contractual agreement.

To unravel the why behind delayed payment of intern teachers, both TSC CEO Dr. Nancy Macharia and the Chairperson, Dr. Lydia Nzomo have been summoned to appear before Senate Education Committee next week.

The committee will be seeking to find out when the commission is planning to pay the intern teachers. Also, TSC will have to explain why it employed teachers with university degrees as interns earning less than most non-teaching staff at the schools where they offer their service.

Kericho senator Aron Cheruiyot has asked the committee to take TSC into task to come clean about interns and their fate after the end of their contractual agreement.

Mr. Cheruiyot noted that, the sacrifice interns are making should culminate to fruition such that, incase of employment, priority should be given to them.

“Its important that their sacrifice counts to something. They should be given priority when TSC resolves to employe teachers”, Said Senator Cheruiyot.

While contributing to the motion, nominated senator Alice Milgo, challenged TSC to come up with a clear framework on recruitment and payment of interns who have gone three months without pay.

According to the contractual agreement, interns recruited to teach Secondary were to take home a monthly stipend of Ksh. 15,000, however due to statutory deductions, the teacher only remains with Ksh. 10,000.

The statutory deductions include Sh1,200 for mandatory personal accident cover, sh3,000 for HELB loan(only those who benefited), sh800 for National Hospital Insurance Fund(NHIF), sh600 for National Social Security Fund(NSSF) and sh1741 for Pay as You Earn(PAYE).

Those posted to primary were entitled to sh10,000 but after statutory deductions like NSSF, NHIF and a PAYE of sh 1,116 the teacher takes home sh6,000.