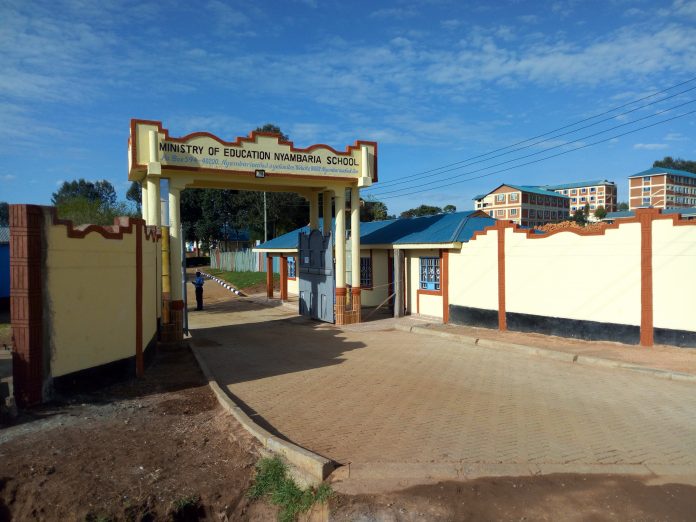 Nyambaria High School is a boys’ national school located in Nyamira County, Kenya. It is a Seventh-day Adventist school that was established in 1966 as a small school, with few dormitories, but has grown considerably since then. Nyambaria School now has a student population of  approximately 2000 students. It is part of the Seventh-day Adventist Church’s worldwide educational system.

The school was started at 1966 as mixed school.Nyambaria boys’ high school is seventh day Adventist school in Manga district at Nyanza Province. It started with very few buildings though it has grown to have 7 storey buildings,a complex laboratory and a lot of students from all tribes.

Presently, the school has twenty one classrooms, a science complex laboratory, a computer lab, a library, a woodwork shop and 14 dormitories.

The school has always been leading in the county level with it’s impressive academic performance which has seen the enrollment of more students every year, and currently it has a population of about 2000 students whereby the highest enrollment of form ones was done.

The school has an active record in co- curricular activities having reached the nationals levels in drama, rugby, music, science congress and indoor games. The students are also involved in contests, symposia, discussions and excursions which has contributed to the positive representation in co- curricular activities, It also helps in nurturing their talents as they prepare to face the future.

‘MOTTO: EDUCATION FOR LIFE.” Shows that we are committed to education and we are to achieve the best of nothing but the best. Long live Nyambaria.

Individual candidates can check their KCSE results by SMS or online using an SMS number or website link provided at the release of the exam. Candidates and parents should visit the school for their official results slip. Results for all candidates and the school national, county and local ranking can also be found from the schools’ office.

The ministry of education advises parents teachers and pupils to check the KCSE result slip for any anomaly such as incorrect candidate’s name, school name and code as well as wrong subject grade and report to KNEC within a month after the announcement.