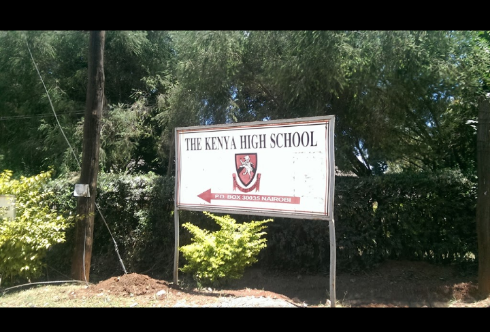 The school was established in 1908 as the Kenya European Girls’ High School. It was renamed to The Kenya High School upon independence in 1963. The school enrolls about 1200 students annually. It is a boarding school.

A national high school located 5 km northwest of downtown Nairobi, in Kenya, it still retains some English traditions handed down from the colonial settler era. It is primarily a boarding school with 10 boarding houses (originally named after notable women in European history,and are now named after Kenyan rivers), and accepts day-scholars on a case by case basis. It consistently performs well in national secondary exams (KCSE), and has enforced a proper code of conduct to be followed by all.

The Kenya High School had its beginnings in 1910 when a co-educational school called the Nairobi European School began in buildings designed for police Barracks. In 1931 the boys were separated from the girls. In 1935, the school was renamed The European Girls Secondary School and had its first Headmistress, Miss Kerby appointed. In 1939, the school was renamed The Kenya High School. http://www.kenyahigh.ac.ke/

Kenya High School has an enrollment of about 1300 students each year. The ten houses (dorms) are home to about 90% of these students for eight and a half months in a year. Each of the houses accommodates about 130 students; all from the four different class levels i.e. Form One through Form Four (equivalent to US Grades 9-12). The houses are Tausi (formerly Huxley) & Sabaki (Cubbie), Chania (Beale) & Yala (Nightingale), Nyali (Mortimer), Suswa (Mitchell), Sagana (Hamilton) & Naivasha (Bronte), Baden Powell (has retained its name, but is often referred to by its acronym, BP) & Mara (Curie). The symmetrical architectural design of the school has two houses in each building except for the two in the middle (Nyali and Suswa), which are home to one house each. There is a resident matron/house mistress for every block, (two dormitory houses), except Nyali and Suswa, which each have their own matron. Besides the matrons, disciplinary action in the dorms is up to the prefects (Heads of Houses/blue-rags) and their deputies (red-rags). Besides the “blue-rags” and the matrons, the principal and her deputy are the main disciplinarians. Although minimal, academic faculty often have the upper hand in studies.