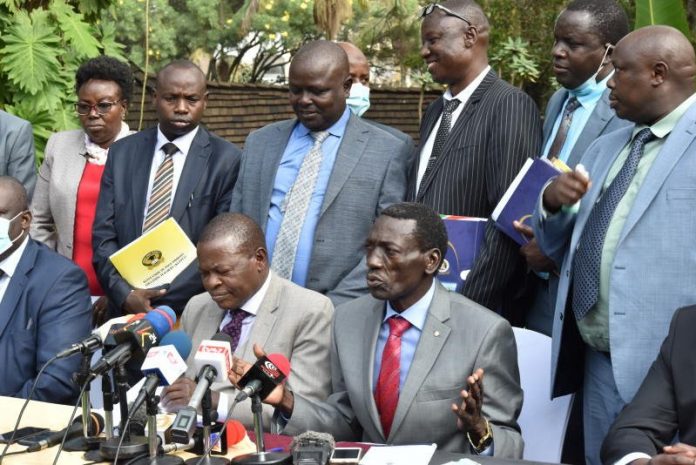 Teachers Service Commission (TSC) on their grievances on unfulfilled CBA,

All KNUT members who missed out on the third and fourth phases of the just ended Sh54 billion salary deal will get between Sh192,000 and Sh360,000 by end of August.

All the 16,000 teachers who are Knut members will get their withheld money paid after a successful meeting with the TSC.

This means that Knut members will have a total salary raise of between Sh8,000 and Sh15,000, backdated to cover the two years they missed out.

Some of the teachers will also be promoted after they missed out on the opportunities when the rest of their colleagues were moved up during implementation of the CBA.

Some 86,000 primary school teachers were promoted as the TSC implements the last tranche salary deal.

During this exercise, teachers who were previously on job group B5 earning a basic salary of Sh21,345, were moved to C1 with a salary increment of about Sh8,000.

The P1 teachers have so far received at least two automatic promotions since 2017 when the CBA was implemented, as Knut members were stagnated. Primary school head teachers and their deputies who had been at job group G (and who were not Knut members) were the greatest beneficiaries of the increment.

Head teachers and their deputies who were Knut members also lost significantly under the last phase of the CBA.

For instance, a head teacher who was earning Sh45,000 in June 2019 now earn Sh62,272 as their Knut counterparts salaries remained unchanged.

Oyuu said Knut members who missed out on these benefits will now enjoy the deal following successful meeting with TSC that unlocked the pay.

It also emerged that Teachers Service Commission (TSC) has invited the unions to a second meeting next week Tuesday to continue the botched Collective Bargaining Agreement (CBA) talks.

The previous meeting called by the employer hit a snag after unions rejected a counteroffer that lacked monetary component.

The teachers’ salary boom will however mark the first win for the new Knut administration, just weeks after assuming office.

Collins Oyuu, the Knut secretary general said he is negotiating with TSC to release agency fee which is calculated at about 1.5 per cent of a members gross monthly pay.

The money was locked up as TSC and Knut had different interpretations of the Justice Byram Ongaya ruling on Career Progression Guidelines (CPGs).

“What delayed the payment of these teachers was the varied interpretation of a court ruling between TSC and Knut leadership.

“We have resolved that because we do not want unnecessary fights wit hemployer,” said Oyuu.

In his ruling, Justice Byram Ongaya of Labour Relations Court set aside Career Progression Guidelines (CPGs) rolled out in 2017 and reverted to the old Schemes of Service to guide promotions of all teachers under its payroll.

Ongaya ordered the teachers’ employer to promote unionisable teachers according to the schemes of service.

The ruling was a major win for Knut leadership under Wilson Sossion that had preferred Schemes of service as opposed to the CPGs.

Under the Schemes of Service supported by Knut, all non-graduate teachers in job group G got automatic promotions to job group L; and promotions were also done automatically, every three years and based on annual appraisals.

But under the CPGs, all teachers were required to undertake modular training in selected institutions, and were in turn to get certificates that guide promotions.

The interpretation of that judgement was contentious, with Knut insisting that TSC is committing an illegality.

On its part, TSC said it was unable to fully pay teachers their salary raise, locking out Knut members who supported schemes of service.

According to TSC chief executive Nancy Macharia, the court ruling meant that all Knut members could not benefit from the third and fourth phases of the multi-billion-shilling salary raise and promotions deal.

“To comply with the resultant court orders, the commission undertook teacher promotion in accordance with the relevant provisions of the Code of Regulation for Teachers and the Schemes of Service for all Knut members, and CPG for non-members of Knut,” Macharia said in 2019.

TSC also threatened to recover all the monies already paid to Knut members during the first and second phase of the CBA, kicking off major mass exodus of teachers from the union that saw membership start to dwindle.

Oyuu said after only a few days in office, he has managed to restore industrial relations with TSC.