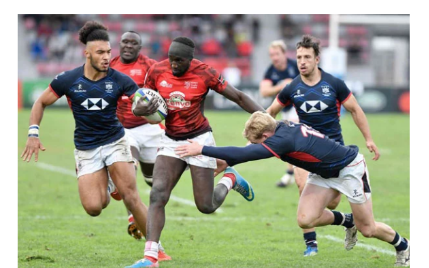 The 28-year-old Onyango collapsed and died on Tuesday night at around 10pm in his house in Ngong.

He had trained with his club the previous evening in Ruaraka.

KCB Rugby team manager Philip Wamae confirmed the passing on of the player.

“Not such a good morning here….unfortunate loss. The family has just confirmed the sad incident,” said Wamae.

Onyango, a Maseno School alumnus, has played for Kenya across   representative levels starting with Under-19 in 2010 to his Test debut for Kenya Simbas in 2012 when he was brought on board by Michael “Tank” Otieno to his first Test Match against Namibia on June 28, 2014.

Onyango became a favourite of former Kenya Simbas coach Jerome Paarwater and played last for the Simbas against Germany on November 23, 2018 in Marseille, France during the Repechage’s last qualifying for the 2019 Rugby World Cup.

He played for Kenya Sevens during the 2014/15 season under Paul Treu.

Onyango first played for Impala Saracens before joining Strathmore University Leos and was part of the squad that reached the 2012/13 Kenya Cup final, losing to Nakuru.

He moved from Leos to Homeboyz before scaling further to KCB Rugby and was part of the bankers Squad that beat Kabras 23-15 in last season’s Kenya Cup final in Kakamega.