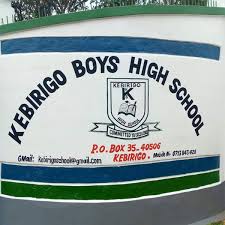 The good news is that 191 candidates managed to score above C+ (plus), which is the minimum university entry grade.

This translates to a percentage of 95.98% securing direct entry to university under the placement body, KUCCPS.

Here is a complete distribution of grades for the school in KCSE 2020 results;

Kebirigo high school has a number of SDA songs. The songs have been posted on their YouTube channel that is very active. Despite their prowess in academics, they have also been known to produce entertaining and motivating song.

Kebirigo High School is a Boys Boarding secondary school in Nyamira County, Nyamira south sub county in Nyanza region, Kenya. It is an extra county school in the region.

The school is located along the Nyamira-Kericho highway 300m from Kebirigo Market.

The school was established in 1960 as small school and admitted its first form ones in February the same year. The school started as a mixed school with both day scholars and boarders. With time gradual facing out of girls began till the school remained a boys boarding school in 2012.

Kebirigo Boys is now having 1180 students. The school has grown in the region and is among the best schools that offer students a ample environment for them to compete favourably with other giant schools.

The school is boasting of good results that its posting in the region and the number of students they are producing every year to the University and other tertiary colleges.

The school has a able principal by the name Ezekiel Kurgat who happens to be hardworking and who wishes well for the school and students. Kurgat is known to be a performer from the other stations that he has worked in and the school is now in safe hands.

The principal is also assisted in his administration by the able deputy by the name Mr. Dennis Okoth who is in charge of discipline and academics altogether.

The school has a teaching staff of 50 teachers who are working tirelessly to improve the mean of the school.

The school has got different departments which are headed by teachers assigned by the teachers service Commission to guide the daily operations of the school in every department. The departments that we have are; Mathematics department which is headed by Mr. Edwin Onyambu Oruko, the science department by Mr. Tom Momanyi, the Humanities Department by Nancy Obwaya, department of Applied subjects by Mr. Sambora Jared and Language department by Nina Gichaba. This comprises of the academic departments in the school. Other departments include Games, examinations, guidance and counselling, Boarding, chaplaincy, ICT, and academics.

To produce all round citizens equiped with high quality Educational, social, physical and spiritual Excellence.

Form One selection and admission criteria

Selection of form ones is not done in school, but its done by the ministry of education. The ministry selects the students and sends respective names of students to school where the students are allowed to download the letter from the ministry’s online portal. If the student wants to forfeit the letter of offer in the school selected and opt for Kebirigo, the parent should come to school so that the school will send a request to the Mistry asking them to place you in this school, if the ministry approves your request, then you will be required to download your letter which you will carry on admission day.

TSC Reduces Number of Invitees for Interviews In Each Advertised Post