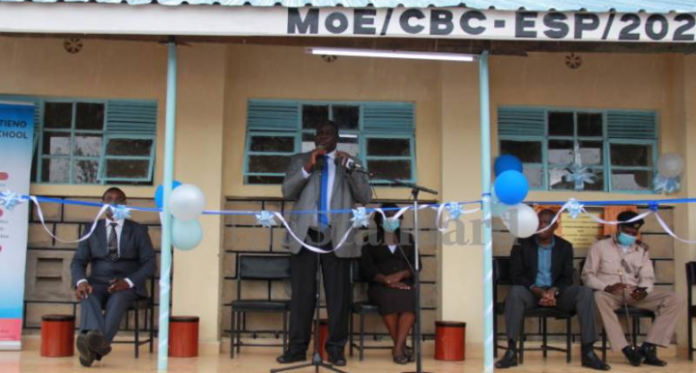 The Basic Education Principal Secretary Julius Jwan has announced that the junior secondary school will be domiciled both in secondary and primary schools.

Speaking at St Peter’s Kotieno Secondary School in Rachuonyo South, Homa Bay County, when he commissioned the construction of additional classrooms, Dr Jwan said in some situations the government will use classrooms in primary schools to host learners joining junior secondary schools.

“Classrooms used by pupils of class seven and eight will remain vacant due to the introduction of the CBC. But the classrooms will not go to waste because they are public resources. Instead, they will be used by students of Junior secondary schools,” Jwan said.

The PS urged the residents to support the implementation of CBC saying the 8-4-4 curriculum failed to recognise competencies and skills of pupils who could not perform well in exams.

“The curriculum being phased is majorly focused on examinations which was a disadvantage for the students who have other skills,” said Jwan.

He argued that the CBC is based on nurturing talents.

“Unlike the other curriculum, CBC is nurturing skills and offering all students to do what they are passionate about,” said Jwan.

The PS warned teachers against leaking national examinations which begin in March.

He pointed out Migori, Kisii, Nyamira, and Homa Bay as some of the counties where teachers tend to open examination papers with intention of leaking them to students.

“We have put in place measures to ensure examinations are not leaked and let nobody think they can outwit us,” Jwan said.

He was accompanied by the chairman of Lake Basin Development Authority Odoyo Owidi who appealed to the government to come up with a clear policy when a school should own a bus.

Owidi expressed concern that many schools in the area own buses but they lack necessary infrastructures such as classrooms, dormitories, and dining halls.