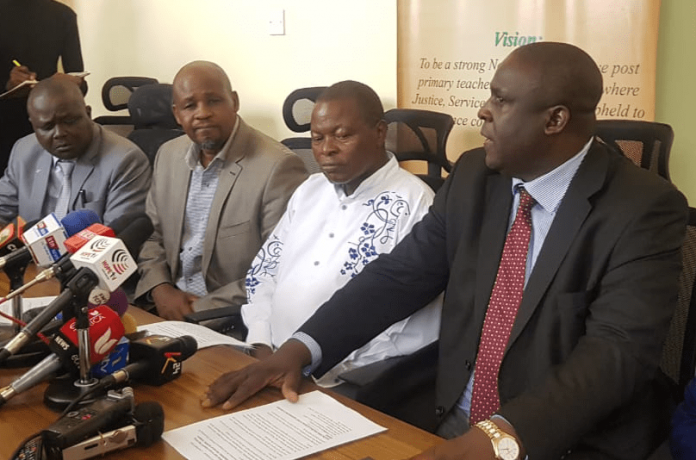 While the government assumed the reports about the harmful substance used in the chemistry practical last Friday, KUPPET insists that it has gone ahead and verified the report of examiners and students taken after the paper.

The substance that was used is called Xylene. Xylene is said to cause skin and eye irritation if they come into contact. It can also cause death when swallowed while its alsonprone to damage organs like the liver,kidney and fertility of the unborn child.

Several teachers and students who got in contact with the substance have been reported I’ll due to  the exposure to the harmful substance. The students were required to heat the chemical and observe the flame produced yet,they were not provided with any protective wear.

KUPPET Secretary addressed the media Saying that teachers who are sick I’ve the xylene exposure have been pointed out in transnzoia,Nakuru and Nandi. They said an expected teacher who was a supervisor at Tidae girls is admitted at a medical facility in Kitale.

Some students from the Eastern region are reported to have been hospitalized over the weekend and later discharged. Despite the fact that there are other harmful chemicals that were used, they raised eyebrows over xylene that was used as an organic solvent.

KUPPET has also raised alarm over the coast of Xylene which goes at 10,000 per litre which could have been substituted by a cheaper and less toxic substance.

Education cabinet secretary professor Magoha and principal secretary have dismissed the reports that students and examiners had been harmed by xylene. “Most of the substances used in chemistry are dangerous. The substance of xylene that they by talking about, is not as dangerous as chlorine and these substances have been used since I was in highschool.” Magoha said.

“These people trying to make noise and pass information to the public may have expected a particular chemical.” Doctor Kipsang said. “We have not heard any formal complain, chemistry teachers will tell you that these are the chemicals they have been using in their normal teaching processes.”