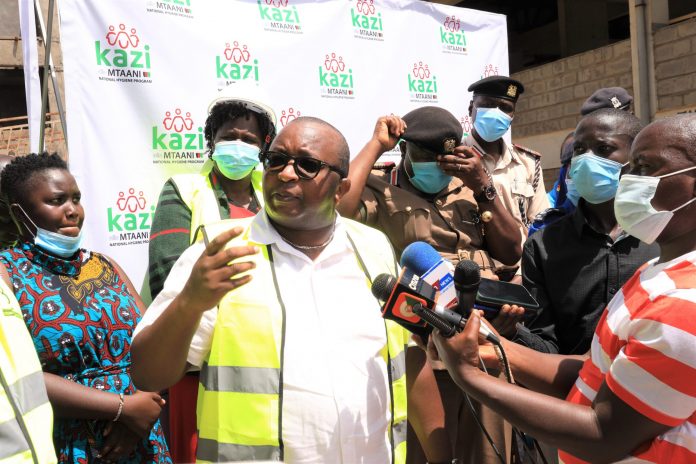 Phase three of the National Hygiene Program (NHP) dubbed Kazi Mtaani that aims to provide employment to youths in informal settlements has been launched.

This follows the registration of the program by the government on November 19, 2021.

The flagging off of the program also took place in Kisumu, Nyandarua, Kilifi and Siaya.

In Siaya County, over 5,600 youths have been recruited in the initiative that will run between June and August.

Principal Secretary for State Department of Housing and Urban Development, Charles Hinga emphasized the program would be stable and non-discriminatory.

“We know that many young people relied on the Kazi Mtaani program which has greatly helped in reducing theft and drug abuse among the youths,” said Hinga.

In the 2020-2021 financial year, the National Treasury allocated Sh.10 billion for the program that also seeks to address the challenges of unemployment affecting the young people.

Over 280,000 youths were employed from 1,100 informal settlements in the 47 counties during the first and second phases of the program.

In the third face, the Treasury allocated an additional Sh3.45 billion for the program undertaken by the State Department of Housing and Urban Development, which is a 56.6 percent increase from the original estimates budgeted for the program.

The shortlisted youths are expected to begin their work immediately.

Their main work is to make sure that they unclog pavements and drainages, bush clearing in public places such as hospitals and government offices, garbage collection and making sure that environment is kept clean.