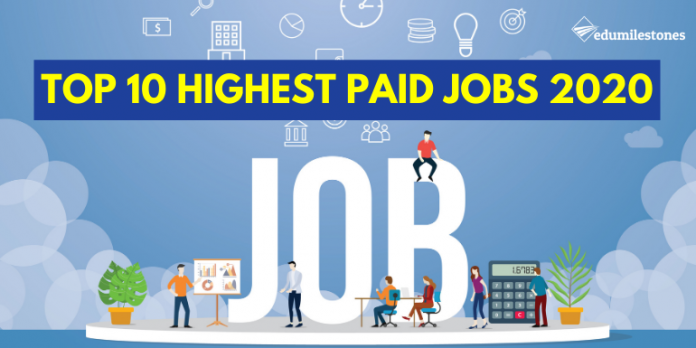 Teachers and employees in the financial field dominated the list of highest-paying jobs in Kenya for the year 2020.

“The highest-paying jobs are concentrated in the private sector, which had 86.2% or 73,099 of all top earners. The public sector, including parastatals, national and county governments employed 11,798 of those taking home the largest paycheques,” reads an excerpt from the report.

Employees in the financial industry came in second in the list of top earners with 15.33% (11,598), while wholesale and retail traders came in third.

Notably, none of the employees in mining, quarrying and production of undifferentiated goods were tagged in the Ksh100,000-a-month or more category.

Kenyans earning Ksh100,000 or more each month accounted for only 2.9% of the 2.92 million Kenyans currently registered under formal employment.

Some jobs pay extremely high remunerative packages worldwide. While master’s degrees will give you a slight edge over your competitors, being equipped with a bachelor’s degree in Kenya and hopefully in the correct field should give you high hopes of drawing some of the heftiest salaries in Kenya. The best paying sectors are banks, investment funds, telecommunication companies, and manufacturing sector companies.

which are best paying jobs in Kenya?

From the Analysis conducted this year by (KNBS) The following careers topped the list;

They are some of the most important players in many companies. They literary watch over company funds. This also makes them part of the top management of all serious companies. Since the field is quite large, those who rise up to the position of Chief Finance Officer take not less than a million Kenyan shillings. Internal auditors make almost half a million while private practitioners could earn in millions.

Medicine is a well-paying job with high market value, what with medical graduates earning right after internships. The absorption rates are high with graduates having a choice be between government and the private sector. Many could work regular jobs while running their own private clinics; so the earning potential in this field is very high.

A pilot’s profession is a highly paid one. Though it may take some time to become to pilot it’s worth the wait; senior captain is known to earn not less than 1.1 million Kenyan shillings per month. But the cost of pilot training is expensive and hence prohibitive

Architect design cities and homes with some of the best houses in the country being designed by Kenyan architects. This is a highly in demand and well paid job with architects earning more than two hundred thousand per month.

For those who can argue well, politics is a great career. Qualifications required are quite low: just a high school completion certificate and fluency in English and Kiswahili. The perks are amazing with allowances, interest-free loans like house loans, car grants, and other grants and great business contacts for a lifetime. But yes, there could be fierce competition

This is a rare and in demand skill in the finance sector. Some of the Actuarial Science professionals earn even better than their Chief Executive Officers. An experienced actuarial scientist can earn an upwards of five million Kenyan shillings.

Want to be your own boss? Become a lawyer. Though it takes some time to establish yourself on the ground as a good lawyer, it will be worth the hard work. Established attorneys do make lots of millions of Kenyan shillings.

With the right type of engineering course, these professionals earn up to Ksh. 550,000 shillings a month.

Media personalities are raking money at a good pace. Once you become a top journalist, the amount could easily hit a million Kenyan shillings or more every month.

If you are patient enough to study for a Ph.D., it could bring great returns. Lecturers have flexible jobs: they teach when they have classes and catch up with their private businesses when they do not have classes to teach. They earn above two hundred thousand Kenyan shillings.

However, the Kenya Revenue Authority (KRA) has always contested the official data of Kenyans earning above Ksh100,000, highlighting the existence of a larger pool of high income earning Kenyans whose lifestyles do not match the taxes they file each year.

In August 2020, KRA’s theory was vindicated when Kenya’s rich scrambled to get their hands on the new Land Rover defender, with 15 units of the Ksh21 million-vehicle ordered within a week of its launch.

However, the latest KNBS report indicates that nearly half of of the 2.92 million formal workers earned below Ksh30,000 over the year, underlining the problem of Kenya’s pay inequality.

78,500 new formal jobs were created in the econnomy last year which is the slowest pace of formal job growth since 2012. further fuelling the current crisis of youth unemployment.