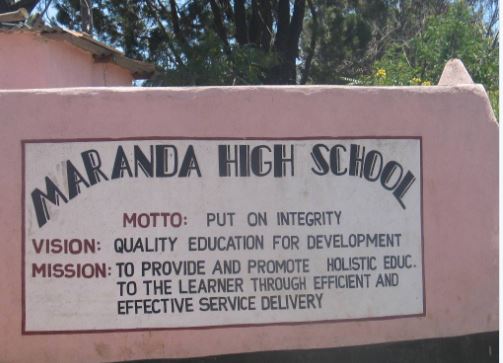 The secondary education institution is approximately 5 kilometres from Bondo and has a consistent long time record in Kenya Certificate of Secondary Education. The principal is Edwin Namachanja. The school as of 2018 had a population of about 2400.

The school closed on September 20, 2012, after a fire in a dormitory that was thought to be caused by an electrical fault. There was another major fire in the school in January 2013, which destroyed two dorms.

Website: Will be updated as soon as it’s available.

The school ranks among the top ten schools in the Kenya Certificate of Secondary Education (KCSE) examination. In 2011, it surprised everyone by moving to the top of renowned giants to emerge the best school nationally. In the succeeding years, it continually performed better-attaining position 7 in 2012 and 2 in 2014 countrywide.

In 2018, despite being hit by unrest after the principal was transferred, Maranda managed to produce 8 As and 11A-. Six of its students were listed in the top 100 candidates countrywide. In the previous year, there was 10As, 113A- and 112B+.

A look into Maranda High School past papers will reveal the kind of quality education its teachers offer. For anyone preparing for an exam, the essence of these previous papers cannot be overstressed. By using them, you will find out some questions you already know and others you barely have an understanding.