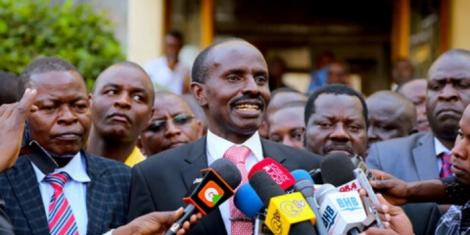 Wilson Sossion has issued a two-week ultimatum to the government to hold talks with KNUT regarding a new salary structure or it will call for a strike.

The notice comes barely two months since the students resumed learning after almost a one-year break due to the Covid-19 pandemic.

Sossion said the current salary rates, where teachers are earning a cumulative sum of Ksh 54 billion, is due for review since it was negotiated during the 2017-2021 Collective Bargaining Agreement, ending in June 2021.

The Union’s SG has warned the Teachers Service Commission (TSC) that if the letter dated February 10 is not responded to, they will organize a nation-wide industrial action.

Sossion also stated that he had written several letters to the TSC asking for meetings to discuss the 2021-2025 CBA.

“Despite correspondence dating back to 2019 urging TSC to formally commence and conclude negotiations with us, including the last correspondence, has been copied to you, (there has been) zero response,” the letter read in parts.

Sossion also added that the TSC’s decision to ignore his letters is an attempt to render the union irrelevant.

According to Sossion, KNUT is aware that TSC has been having consultative meetings with the Salaries and Remuneration Commission (SRC) concerning the new CBA, a move that Sossion has faulted because the union has not been consulted.

He argues that the teachers’ employer had proposed a salary raise of between 16 percent and 30 percent in the 2021-2025 CBA proposals, with classroom teachers getting higher perks.

During the consultation, KNUT boss says the TSC had told SRC to raise the basic salaries between 16 percent to 30 percent.

However, Sossion argues that the 16 percent raise proposal by TCS should be meant for administrative teachers only.

Sossion proposes that teachers not in administrative positions should get a flat rate increment of 30 percent.

He added that KNUT, TSC and SRC failure to work cooperatively has led to the disagreement which is now threatening to affect students.